Women embrace a continuum of perspectives about how gender impacts the way they do business. For some women, being female has no influence on their business practice. For others, it’s all about being female. Many make the conscious decision not to let others’ perceptions about aspirations and behavior limit their commercial success; many seek out business relationships with other women; many prioritize relationship and see exchange as a means to collaborate rather than compete. For most women, at one level or another, being female is a significant component of their entrepreneurial identity: an asset for many, yet a liability for others.

Women are changing the way business is done and building communities of like-minded business owners.

Where once patriarchal laws and attitudes prohibited women’s rights to vote, retain property, or pursue careers, today women are embracing entrepreneurial feminism as a means to participate in the formal economy. Women are changing the way business is done and building communities of like-minded business owners, one venture at a time. Entrepreneurs are no longer the resourceful few, predominantly male, captains of industry who possess stamina and hardened constitutions. Women are breaking the mold. Today across North America, females retain ownership in half of all small businesses and in the United States alone over eight million female-owned firms generate $3 trillion a year in economic impact. For many of these women, their experiences as women inform their business practices and influence how they approach venture creation.

But recognizing feminine capital at play in the venture creation process is not always obvious. Amongst women who identify as feminist entrepreneurs, the language they use to describe their enterprises and leadership styles tends to conform to venture creation that is cooperative and built around principles of mutual gain. They use words such as "team approach," "win-win," and "open and honest" when talking about competitors. Interactions are practical and action-oriented. Enterprise structures are nonhierarchical. Governance is relational, participatory and process-focused. For these women, entrepreneurship and feminist values of egalitarian relationships are interwoven within the market exchange process.

Entrepreneurial feminism may be at odds with feminist criticism that suggests capitalism is a source of women’s subordination—but, in fact, feminism and entrepreneurship share much in common. Feminism seeks to address subordination and enhance well-being—including economic well-being; entrepreneurship offers women an opportunity to achieve economic self-sufficiency, and often to improve the well-being of others—particularly girls and women. Because feminist entrepreneurs are key agents in creating and sharing knowledge and skills, venture creation has become an effective means to gain power and to negotiate wider changes that redress gender inequality and discrimination. In some instances, it is perceptions regarding gender inequality that trigger women’s entrepreneurial inclinations in the first place.

The advances of women’s entrepreneurship notwithstanding, gender inequality remains, owing in part to outmoded assumptions, cultural norms and educational practices. We know that compared to males, female students are less likely to pursue entrepreneurial ventures, regardless of discipline or country-of-origin. One reason is that management curriculum typically personifies the entrepreneur as masculine, through role models and language. No successful business owner is an entrepreneur at birth—access to resources, including gender-sensitive curriculum, shape individual entrepreneurial propensity. Julie Weeks, who formerly directed the National Women’s Business Council and currently presides over a for-profit consultancy enterprise, holds a viewpoint on women-led firms and business support services consistent with this ethos of entrepreneurial feminism.

Women learn and lead differently. It is not so much about ‘the what’ women-focused programs offer clients, but how programs are delivered. Programs are more collaborative and relationship-oriented. They are less transactional, relying on peer or one-on-one mentoring… This builds a sense of community, support that goes well beyond the technical assistance that is offered.

Another barrier to women’s identification with entrepreneurism is their economic invisibility, an invisibility that begins with the very language of entrepreneurship. Over the past century, entrepreneurship has been viewed as an individual endeavor or process. New wealth was seen as having been created by the destruction of existing wealth. Only a few possessed the constitution to helm this process—entrepreneurial men, rational, and heroic, epitomize success as “a will to conquer.” As men laid claim to that which was enterprising, rarely were prototypical feminine qualities such as loyalty, kindness, and compassion used to characterize rational man, and subsequently, the entrepreneur.

In the mid-1900s, scholars continued to build on these theoretical principles to explain entrepreneurial success as the product of “need for achievement,” “propensity to take risks,” and “locus of control.” Early management studies about entrepreneurial leadership employed male-only or male-dominated samples. The iterative nature of scientific conversation further entrenched masculine nomenclature in the concept of entrepreneurial orientation.

Women’s enterprise achievements continue to be eclipsed by a cast of male business scions, and the honoring of industrial superstars, barons, and tycoons. Most North American students learn about innovators and high-tech billionaires Bill Gates, Mark Zuckerberg, and Steve Jobs, names that will undoubtedly be familiar to most readers. Much less celebrated are the successes of Ursula Burns—the first African-American woman to head a Fortune 500 company, or Arianna Huffington—founder of the influential media platform, The Huffington Post. Such successes are far from being historical anomalies. 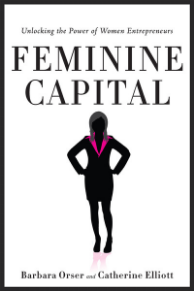 While feminine duties traditionally have focused on family responsibilities, throughout the ages women have assumed commercial entrepreneurial activities—trade, harvesting, crafting, midwifery, and in more recent centuries, small-business ownership. Artifacts testify to the entrepreneurial activities of Indigenous women in early settlements. Upon arrival in New England and New France, female colonists established schools, hospitals, and religious orders. In mid-1600, Lady Sara Kirke managed an international fleet of ships, carrying out commerce through military campaigns and political turmoil. Yet the stories of entrepreneurial heroines are largely forgotten, as the language of enterprise success remains skewed toward the celebration of putatively masculine traits.

This is the environment that precipitates the arrival of entrepreneurial feminism—a conscious and deliberate response to address women’s relative lack of historical access to the levers of business and venture creation. By leveraging feminine capital, entrepreneurial feminists are breaking new ground in creating wealth and social change.

Barbara Orser is Vice Dean of the University of Ottawa Telfer School of Management and co-author of Feminine Capital: Unlocking the Power of Women Entrepreneurs.

Catherine Elliott is Assistant Professor at the University of Ottawa Telfer School of Management and co-author of Feminine Capital: Unlocking the Power of Women Entrepreneurs.

Please note, comments must be approved before they are published